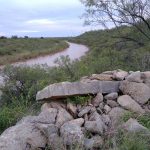 Michael Wilson – In the Western United States there are few issues as contentious as water. Who controls the waterways? Who knows the best ways to allocate the resource? Who knows how to best protect the water and those who depend on it? For years the EPA has tried to control the Western Waterways through the 1972 Clean Water Act. Over time the rules began to evolve until in 2015 the EPA published the Clean Water Rule. This rule stated that essentially the EPA had the ability to regulate all surface and sub-surface waterways in the United States. As a result of this interpretation, Michael and Chantell Sackett were denied a permit to construct a home on land they owned in Priest Lake, Idaho. The EPA claimed that the property contained a wetland, the Sackett’s on the other hand said that since the pond on their property did not connect to any navigable waterway, it was not subject to the rules. However, in 2006 in a ruling handed down by justices in Rapanos v. U.S. the court offered a plurality opinion over regulation of wetlands which left many issues open to interpretation. By suing the Sacketts and other interested parties have asked to Court to clarify their ruling. On January 24, 2022, the U.S. Supreme Court granted the Sacketts’ a new hearing before the court.

What does this mean?

The ultimate results of the case and the resulting consequences depend largely on which side of the water issue you believe. Some environmentalists have declared that if the Sacketts’ win their case, it will spell the end of the Clean Water Act. As a result, the waters of the United States would be subject to unregulated pollution. The also fear that developers would then turn wetlands into shopping malls and otherwise cause irreparable damage to wildlife and the environment. The Chamber of Commerce and property rights advocates claim that if the court rules in the favor of the EPA, that will open the floodgates to the complete takeover of all waters on private properties. These include stock ponds, drainage ditches, and any body of water. The truth, as usual, probably lies somewhere in the middle.

The case will be heard in October and meanwhile, the EPA and the Army Corps of Engineers have scheduled regional roundtables to gather feedback on proposed changes to the Waters of the United States. This new rule will replace the Navigable Water Protection Rule and could possibly muddy the regulatory waters even further. The question really becomes should the Federal Government or State Governments have the final say over waters inside their borders.