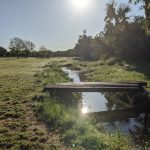 Texas waters are facing something akin to an early warning system that miners used to employ. In the early days of underground coal mining, the miners would keep a canary with them. If the air became toxic, the canary would die before the miners. It was an early warning system that the miners knew to take seriously. Currently Texas is undergoing yet another drought and if people continue to ignore the facts, then it will be like having the canary die and pretending everything is ok. This particular drought comes at the end of a 20-year cycle of drought and dryer than usual periods that is putting a severe strain on the Texas water system. 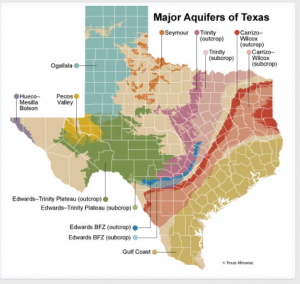 Texas water comes from two primary sources groundwater and surface water. The groundwater consists of  9 major aquifers and 22 minor aquifers. Looking at the map, and where the aquifers are located and how spread out they are, it appears as if that’s a lot of water. So what’s the problem? The problem is simple, the aquifers only get replenished when it rains. Meanwhile municipalities keep drawing out the water, much like someone who has a straw in a drink. Even when it does rain, due to development and poor planning, the aquifers never have a chance to completely refill. Combine the drought with a population growth spurt, and everything is in place for a massive disaster.

One such area of Texas that is a prime example of the change that is taking place is the Texas Hill Country. The Hill Country encompasses over 11 million acres covering 18 counties in Central Texas. The region is seeing unprecedented growth along the I35 corridor. San Antonio and Austin and the rural areas that surround them are seeing explosive growth. This is an area where there are the headwaters of 12 Texas rivers. These rivers help support the farms and ranches, the various cities, and which flow to the Gulf of Mexico. The area and its rich ecology and biodiversity is under attack.

Urban sprawl, excessive pumping of the groundwater, climate change, and a patchwork of development  rules and regulations have left the area exposed. The towns, cities, and counties all must begin to work together to protect the Texas waters that make the area unique. If an area known as the Highland Lakes with its access to both groundwater and surface water sources fails, so to will those areas less fortunate. This latest period of drought, should convince Texans that while the canary is not yet dead, it is grasping for breath.