Welcome to the ARCTexas books section. This is where you will find links to both our latest releases and past works. 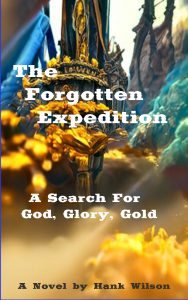 We Explore and Conquer For God, Glory, Gold

“I record this for the benefit of those who are to come. I have tried to be faithful to what we saw and did.
May God have mercy on our souls. Fray Miguel De La Garza. December 1611”

This story is built around excerpts from the recently discovered journal of Fray Miguel De La Garza as he recorded the events that took place during travels to explore an unknown territory. The expedition was made at the request of then New Mexico Governor Don Pedro de Peralta and took place between 1612 and 1613 in New Mexico and Tejas..

The friar’s journal recounts the groups adventures including their encounter with the Manso peoples of the Rio Bravo valley, The singular focus of the Spanish captain to locate lost gold. The dangers the group encounters crossing the desert, both natural and man made, including sudden and dangerous weather changes. Trespassing into sacred grounds of the Apachu people’s and subsequent encounters.

From the book,
“Suddenly, I heard a scream and turned and looked to watch the last pack horse be ripped away from the soldier leading it. The horse was swept into the river and out of our sight before anyone could move. The screams of the terrified animal pierced even the roar of the river and the downpour. The soldier was struggling to get his own horse under control, but the horse slipped, and the soldier was thrown clear. The water covered him as he struggled to climb up the bank. Just as he almost reached the top and escape the water he screamed in pain….”

Page 127
“As I knelt over corporal Reyes and began to pray, I realized how little I knew about him. Of all the men in the party, he was the one I had spent the least amount speaking with. He had seemed so unapproachable so aloof, but now as he lay before me within minutes of death, he was fragile. His breath became harsher and more labored, and I was sorry I had not brought any holy water with me. I could not comfort him with the proper last rites of the church. I could only pray for him and as I reached out to take his hand, he suddenly gasped once, and I knew his life had left him.”

Available as an eBook at

Available as a Paperback or Hardback at Amazon