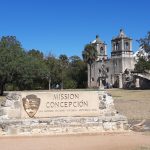 Preview of what I’ll talk about in this episode

Today I want to talk about the missions that the Spanish established when they decided Texas was part of their territory and they wanted to discourage the French from expanding into Texas.  I’ll talk about the reasons for the missions, how many they established, and some of the good and the bad that took place around and in the missions.  In the last episode, I spoke about how, in the new world, the Spanish sought the three G’s, God, Gold, and Glory, the Spanish missions in Texas are a direct result of that philosophy.

As a majority Catholic nation, whose people had lived under Moorish (or Muslim) rule for a total of 800 years.  However, that 800 years statement is something of a misconception because it makes it seem as if the whole country lived under Moorish rule the entire time in fact, the Moors lived in about two-thirds of Spain (or the Iberian Peninsula) for about 375 years, a little more than half for another 160 years and finally their last stronghold in Granada for about 244 years. Eventually they were driven off of the peninsula and the country came under a unified Catholic rule.  (That in itself caused some issues, but this is a Texas History podcast, so I won’t go into depth on that.) However, the rulers of both the country and the church had a goal in mind when they encountered new peoples, and that goal was to convert the natives to Catholicism….